The brain is arguably the most important organ in the human body. It controls and coordinates actions and reactions, allows us to think and feel, and enables us to have memories and feelings – all the things that make us human.

While the brain only weighs about 3 pounds, it is a highly complex organ made up of many parts. Years of scientific study of the brain have made it possible for scientists to identify the various areas of the brain and determine their specific functions. The following information gives a brief description of some of the major parts of the human brain.

The brain is protected by a bony covering called the cranium (which, along with the bones of the face, make up the skull). Inside the cranium, the brain is surrounded by the meninges. The meninges is made up of 3 layers of tissue:

The cerebrum – the front of the brain

The largest part of the brain located in the front is called the cerebrum. The cerebrum is responsible for:

The hemispheres of the cerebrum are divided into lobes, or broad regions of the brain. Each lobe is responsible for a variety of bodily functions:

The brainstem – the middle of the brain

The brainstem controls vital functions of the body, including:

The cerebellum – the back of the brain

Behind the cerebrum at the back of the head is the cerebellum. In Latin, cerebellum means “little brain.” However, the cerebellum contains more nerve cells than both hemispheres combined. The cerebellum is primarily a movement control center, responsible for: 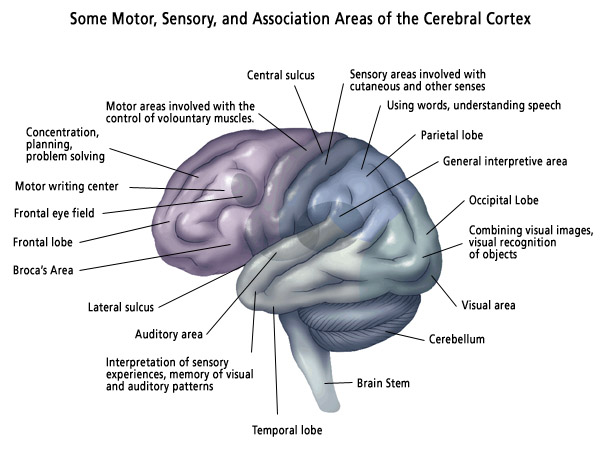 Other important parts of the brain

Ventricular system
The brain is not a solid organ. There are fluid-filled cavities within the brain called ventricles. The ventricles are important in providing nourishment to the brain. The ventricular system produces and processes cerebrospinal fluid – a clear, watery substance that flows around the brain and helps cushion and protect it.

Cranial nerves
The brain also contains 12 pairs of cranial nerves each responsible for specific functions in the body: