When looked at from the side (i.e. the sagittal plane) the spine has three main curves: 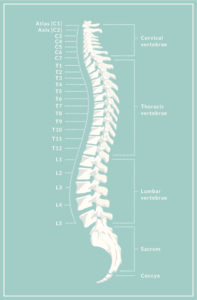 Thus the normal spine naturally has curves. However, in some individuals these curves become more or less pronounced. When the curve becomes abnormally convex, particularly in the thoracic spine, the patient is described as having a hyperkyphosis.

Types and Symptoms of Kyphosis

There are several important terms that spine specialists use to distinguish between different types of kyphosis:

Most patients visit a doctor with this disorder when they become aware of a convex curve to their back. Some patients may also see a doctor due to back pain, especially those adolescents who have a thoracolumbar kyphosis.

In addition to the convex curve in the thoracic spine, some patients develop what is called a compensatory curve in the lumbar spine.

Your doctor will employ several diagnostic methods to accurately diagnose your condition.

A physical exam will help to visually identify a curve. A forward bending test will be used to determine if a thoracolumbar curve exists. In addition, the doctor will look for tightness of the hamstrings and tenderness with some of the spinal muscles, both of which are common symptoms of Scheuermann’s kyphosis.

At least two specific x-rays will be done. The first is a standing, lateral (sideways) x-ray, and the second is standing x-ray from the front. These are used to identify the curves in the sagittal plane (side view), and to determine if a curve exists in the frontal plane as well.

In addition to x-rays, your doctor is likely to order an MRI to provide further imaging detail of the spine.

If thoracic kyphosis in an adolescent exceeds 70 degrees it is a clearly visible deformity. Treatment is usually recommended to prevent further progression of the curve.

The primary non-operative treatment of Scheuermann’s kyphosis is to use a brace to prevent further curve progression. The brace will be carefully fitted by a specialist to ensure maximum comfort, and can be worn under clothes.

In addition, your doctor is likely to prescribe a carefully designed exercise and physical therapy program to help spinal flexibility and increased muscle strength.

If the curve continues to progress after non-operative treatment, or when the kyphosis is severe, surgery may be considered. Candidates for surgery include patients who have:

The surgical procedure will obviously be tailored to fit your specific condition. Your surgeon may do the procedure from the front of the spine, from the back of the spine, or may do a combined procedure that involves approaches from both the front and back.

A fusion of several vertebrae supported by instrumentation (including hooks, screws and rods) will probably be used to correct the spine’s alignment and to prevent further curve progression.

A surgical procedure to correct Scheuermann’s kyphosis is a major procedure, requiring a gradual and careful recovery period. Prior to surgery your medical team will explain what to expect in the recovery process. After surgery they will instruct and encourage you through each stage, from leaving the hospital, to beginning light exercise to returning to school or work.

When to See a Doctor for Low Back Pain

Tips to Sleep Better with Low Back Pain